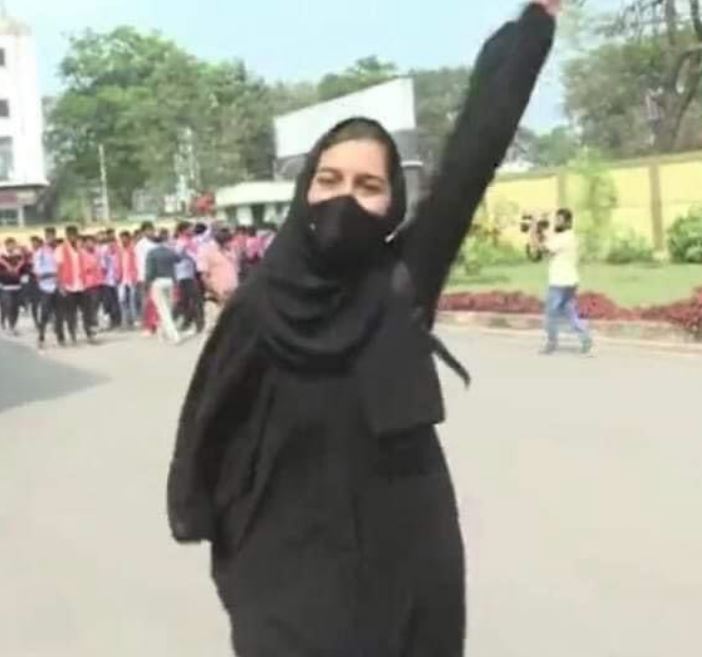 Karnataka, a state of India, bans hijab in government owned educational institutes. It prohibits Muslims from practising their religion at educational premises.

India and Pakistan hostility goes back to the time of partition. To date, Indian Muslims face repression in the so-called secular country. Amid the hijab ban dispute, a video of a Muslim girl wearing hijab surfaces on Twitter. The video promptly went popular all over social media. A girl named Muskan was wearing hijab to her college in Karnataka. The video showed Muskan being harassed by a mob of over 100 men wearing saffron scarves.

The burka-clad student Muskaan Khan, who faced the wrath of the crowd raising slogans of "Jai Sri Ram" on a college premises, on Wednesday that she will abide by the court order regarding the wearing of hijab. (IANS) pic.twitter.com/y3eCfW46l6

While she was entering her institution, male students yelled “Jai Shri Ram” (success to Lord Rama). Inreturn, Muskan shouted ‘AllahuAkbar’ (Allah is great) and paid a deaf ear to the increasing mob of male students.

Talking to media, Muskan also told that she was stopped at entrance but on forcing the entry she was harassed by male students. “They ordered me to remove my burqa and denied letting me in. The mob began shouting ‘Jai Shri Ram’ as soon as I walked into the college” she said. The video, circulating on Twitter, sparked uproar.

When i watched this video tears of joy comes automatically from my eyes Allah hu Akbar ☝🏻
P.s : Muskaan you won the hearts of muslim ummah across the globe may almighty ALLAH swt bless you and keep you always on it's path Aameen ☝🏻❤️#HijabIsFundamentalRight #HijabisourPride pic.twitter.com/rgQ9UuBShD

The new policy and protest by Hindus against practising Muslims has instilled fear in the hearts of the minority. Many occurrences identical to this have occurred in the past. Girls wearing hijab were locked outside university gates. A teacher was laid off for her choice of wearing hijab.

“College is forcing us to choose between studies and the hijab”.

Refusing to let girls go to school in their hijabs is horrifying. Objectification of women persists — for wearing less or more. Indian leaders must stop the marginalisation of Muslim women. https://t.co/UGfuLWAR8I

Read More: Here’s Why India Wants To Ban KFC And Other Brands

“Exploitation of women continues — for wearing less or more. Indian politicians must put an end to Muslim women’s marginalization” she wrote.

Wearing hijab is a part of Islamic faith. Women wear hijab to cover themselves and those practising it should not be condemned. Clothing has always sparked controversy, particularly in the western world. In 2004, France outlawed the hijab, and now India is following suit.

Germany to assist in the implementation of environmental programmes

Egypt and Pakistan pledges to improve military and bilateral ties