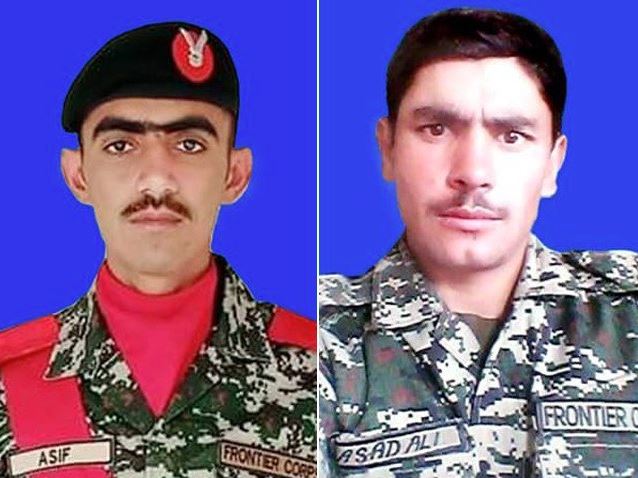 According to News, two Pakistan Army personnel were assassinated following a fierce exchange of fire with militants along the Pak-Afghan border in Kurram region on Tuesday.

Terrorists from Afghanistan tried to jump the Pak-Afghan border fence in Kurram on the night of October 26-27, 2021, according to Inter-Services Public Relations (ISPR), who added that forces responded quickly and foiled the attempted unlawful crossing by engaging the terrorists.

Lance Naik Asad, 24, and Sepoy Asif, 21, both of Kurram, embraced shahadat during the heavy exchange of gunfire.

Pakistan has severely denounced terrorists’ use of Afghan land for anti-Pakistan actions and hopes that the interim Afghan government would not tolerate such activities in the future.

“The Pakistan Army is dedicated to secure Pakistan’s borders against the threat of terrorism, and such sacrifices by our gallant soldiers enhance our resolve,” the statement continued.

Earlier in August, two Pakistan Army personnel were killed in a cross-border strike when militants from Afghanistan fired on a military position in Bajaur from across the international boundary.

Read More: TLP demands are accepted except for removal of French envoy

Terrorists from within Afghanistan crossed the international border and opened fire on a military installation in Bajaur, according to ISPR. During the exchange of fire, two Pakistan Army troops, Sepoy Jamal, 28, from Mardan, and Sepoy Ayaz, 21, from Chitral, were killed.

Murree opens up for travelers

Pakistan to revise travel policy for people flying from UK