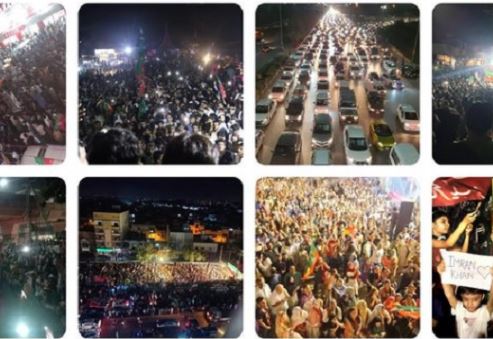 The angry employees yell shouts against the removal of Imran Khan’s regime. Meanwhile, members of the Pakistan Muslim League-Nawaz flocked to the Avenfield apartments to express their support for the party’s chairman.

The clash between the rival sides devolved into a battleground of insults and chants toward each party’s leader.

Police forces also arrived at the Avenfield residences to contain the tension, fearing a fight amongst activists on both sides.

Additionally, Pakistan Tehreek e Insaf (PTI) Chairman Imran Khan states in his first tweet after his removal as premier that Pakistan earned independence in 1947, but the liberation movement goes on today against a foreign conspiracy of political transition.

Imran Khan tweeted, “It is always the people that safeguard their country’s freedom and integrity.”

The National Assembly passed a no-trust resolution against Imran Khan by 174 votes. As a consequence, Imran Khan no longer serves as the Prime Minister.

Also Read: Pakistani Universities Among the Best in the World

Moreover, widespread demonstrations are underway, with a large number of people declaring their allegiance to the deposed premier and PTI leader Imran Khan.

Further, people are demonstrating at Liberty Chowk in Lahore, Johar Morr in Karachi, Faisalabad, Rawalpindi, Sialkot, and other locations around the nation against the ‘external conspiracy’ that led to the political transition.

Meanwhile, former Prime Minister Imran Khan expresses gratitude to the people for their outpouring of support. He mentions that the demonstration shows that Pakistanis rejected the regime change.

Finally, it’s worth highlighting that PTI loyalists are demonstrating Imran Khan’s removal as premier in Pakistan and around the world.

Punjab Police Prohibits Use Of TikTok, Urges Ban On PUBG

Islamabad: Once a week lockdown to be maintained