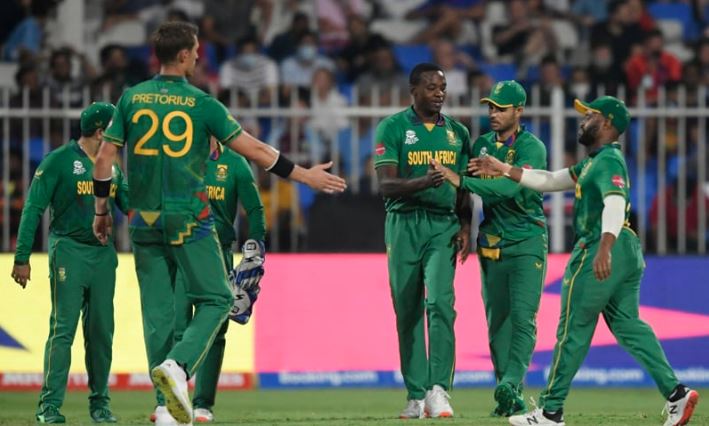 Winners of Group 1 From the six-team pool, England and Australia, advanced to the final four after defeating West Indies in the opening match of the day.

After Van Der Dussen slammed six sixes in his 60-ball innings, South Africa totalled 189 for two, but England needed to be limited to 131 or less to beat Australia on net run rate.

After a hat-trick by Kagiso Rabada in the last over, England, who led the group when they crossed 109, finished on 179-8. It was England’s first defeat in the last five games.

Van der Dussen and Aiden Markram, who scored 52 off 25 balls, put on an unbroken third-wicket partnership of 103 to set a tough target for their side.

With a second-wicket partnership of 71, Quinton de Kock and Van van Dussen resurrected the innings.

With his leg-spin, Adil Rashid broke the stand and put De Kock out for 34.

Van der Dussen, on the other hand, remained composed and balanced his prudence and aggression to achieve his half-century in 37 balls.

He then joined forces with Markram to attack the bowlers. In Chris Woakes’ fourth over, the 16th of the innings, the duo pounced, smashing three sixes between them for a total of 21 runs.

With a six off Chris Jordan, Markram achieved his fifty off 24 balls. He had two fours and four sixes in his innings.

In response, England got off to a good start, with boundaries from Jason Roy and Jos Buttler in the opening four overs. However, while running alongside Buttler, Roy had a calf injury and had to be carried off the field.

South Africa took advantage of the situation, and in the following over, Anrich Nortje dismissed Buttler for 26. Jonny Bairstow was then lbw for one by Tabraiz Shamsi.

Moeen Ali, who hit 37 off 27 balls, and Dawid Malan put up a 51-run stand, but Shamsi put the brakes on once again.

Moeen struck Shamsi for a huge six, but he was out the following ball, trying another big one that went straight into David Miller’s hands.

Despite losing his partner in the following over, Malan maintained the pursuit on pace with Liam Livingston, who smashed Rabada for three consecutive sixes.

However, Livingstone was dismissed for 28 runs, and South African bowlers gained command.